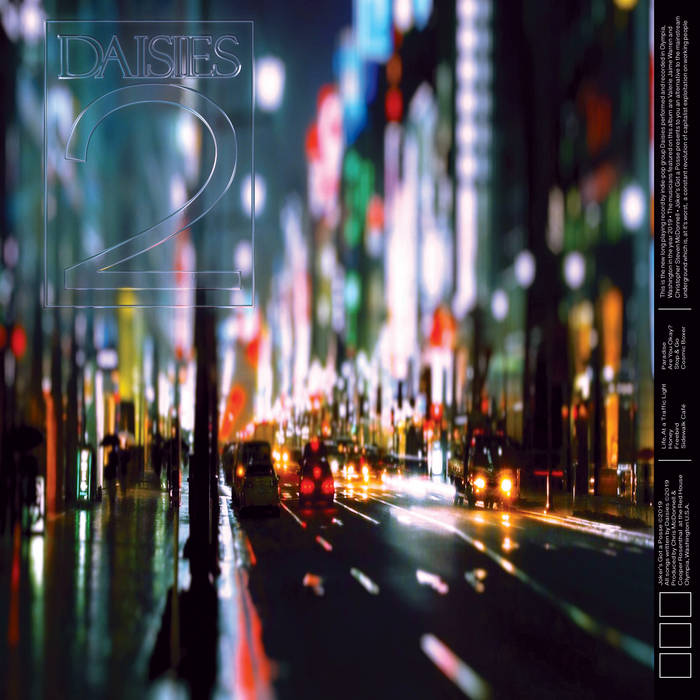 Actual Garbage They really sang Willy Wonka over a breakbeat. Even just coming up with that idea takes actual genius, let alone executing it this well.

Daisies ​nick their name from England’s second generation flower children, peace-loving denizens of the nation’s late 80s/early 90s rave and festival cultures. Its a soft allusion to the ‘indie’, ‘baggy’ and psychedelia-inflected sounds of Happy Mondays and Saint Etienne extending to the sensibilites of these groups’ contemporaries in fields, warehouses and on pirate radio, the acid-and-hardcore-cum-jungle-and-dnb enthusiasts who no doubt fed off the same heady beat-driven craze even as they pushed it to more locally specialized, commerically informal and anonymous ends. Daisies conduct themselves like a band of the former variety, with their poppy, vocally fronted, LP-focused output, but the operative ethos is closer to that of producers or deejays of the latter. There is little interest in autobiographical narrative or persona except to play with them as conventions, sometimes for entertainment purposes. The musical focus is unequivocally—and unwistfully—on music’s immediate past, or mixing up certain chapters from it, or better yet irreverently tearing out the redeemable pages in those chapters and ecstatically highlighting their most salient phrases. The aim is to stake out and cultivate an unauthorized site of disciplinary potential, a composite space where industry’s anxious appeals of FFO and YMAL might lose their reassuring power, allowing for a healthier imaginary to circulate more freely and flourish.

Although ​Daisies 2 ​comes mere months after the debut ​What Are You Waiting For?,​ it highlights a shift in sound that seems fairly premeditated. The record peaks in intensity with openers “Life, At a Traffic Light” and “Freebird” before sinking into two emphatically laid back instrumentals, an ambient reprise of “Life,” and a pair of unusual covers: one a version of Leslie Bricusse and Anthony Newley’s “Pure Imagination” from the 1971 film Willy Wonka & the Chocolate Factory​, the other based on Bill Fay’s unreleased track “Cosmic Boxer,” which he recorded in the late 70s after being abandoned by major labels in the UK. Hovering somewhere between inspired pop remakes and originals smuggling in used goods, both sport brisk tempos (145 and 160 bpm, respectively) and bookend the album’s more subdued second half. The predominance of breaks, rhodes, brass samples and minimal vocal refrains gets the whole project fluent in the language of British dance music as it sobered following the Criminal Justice and Public Order Act 1994, whereby raves were outlawed and beats banished to the clubs, effecting an emphasis on technical refinement and sophistication which eventually prevailed. Daisies 2 ​belongs to a world still deeply marked by policies of cultural desertification and their aftermath, and so toning down and tightening up would seem an appropriate reflex, even where it is not a compulsory alternative to producing music particularly for illicit forms of collectivity.

Bandcamp Daily  your guide to the world of Bandcamp